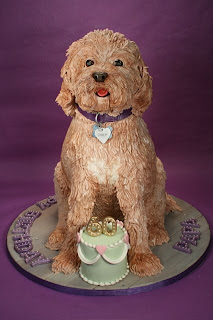 As I mentioned in my previous post, April 24th was my dad's birthday. What I didn't divulge, for fear of him finding out, was that we planned two parties for his 60th. The first was an intimate gathering with the immediate family, which meant including the dogs as well! We all gathered at The Benjamin Hotel in New York City because they allow dogs. As a decoy I made my dad just a small cake, with his name spelled out in Nautical flags (since he has just bought a boat) and it had his favorite child, his labradoodle Joey squeezing through the number sixty. 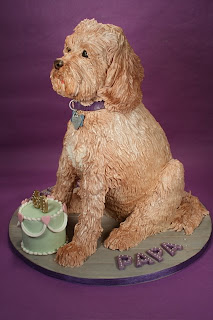 The big celebration was a surprise party this past Sunday at my parents' house. For this I made a life-sized cake of Joey. I actually videotaped the making of the cake so I hope to have a short film of it soon. My filmmaker friend, Lisa Stock lent me her camera and is doing all the editing for it as well. You have to check out her website, especially her "Bride of Frankenstein Cake" video. It was difficult making something out of cake that you know so well. I wanted to keep adding fur to make it look more like Joey. My cousin Jordan took amazing photos that captured my dad's surprise as well as the cake cutting. Check it out:http://flickr.com/photos/jpop3000/sets/72157604767410663/show/
My brother Eric made an amazing video and posted it on his own blog too! 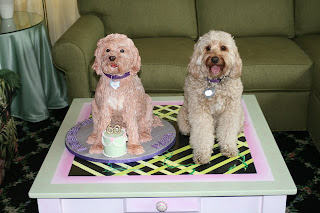 Joey was so amazing...and she (can a cake have a gender?) tasted great too! You're the best cuz!

Thanks for the shout out.

I saw this cake in person and my first reaction was to go over and pet her. So amazing Elisa!! I'm so happy your dad loved the cake. And the "making of" footage is quite fascinating!

You're so insanely talented. The cake is amazing. Just curious, though: did your Dad feel a bit strange cutting into the dog?

Did you eat your dog cake?

This cake is amazing! You are inspiration for me.

Hey, i have a Question what was the head made out of, wax?

before, a person can often happy together, do this for her mother who, better than anything else.But a moment's effort, a few people sitting in the room, and head of the family of Shen Feng-wing,Christian Louboutin Outlet at the moment has gone forever, SHEN Han could not help but ask: "Dad do?"When the mother for her daughter always have a special love, Shen came back with this very happy she did not think she can put th

monochromatic shoes, Louboutin forced the court to address aesthetic functionality as to whether or not other companies can fairly and effectively compete for prospective consumers without using red on their shoes. This forced the court to opine that in fashion a depletion of colors would be anti-competitive in nature, and thus impermissible. The manner in which Louboutin framed the issue by pursu

n my career I saw a photo of her -- and she wasChristian Louboutin Women's Boots wearing my shoes!Louboutin: Nicole Kidman. She wore them very early on. She was wearing them at the funeral of the late Princess Diana. Louboutin: Yes. I created shoes for a film John Malkovich directed -- he was living in the south of France and we met. He actually wrote the intro to my book. I also made shoes for Christina Aguilera to wear in Burle

in which one lives. If the unemployment rate falls, more people will struggle – as will national and local economies.It is also important that those in other countries have jobs with fair pay and fair working Christian Louboutin Women's D'orsayconditions. Children should also be allowed to play, not slave away with broken bones in a sweatshop.In a 2009 article published in Harper's BAZAAR , Dana Thomas writes, "'I remember walking