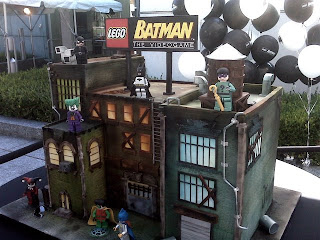 This past Tuesday we delivered the heaviest cake we have ever made. Warner Bros. asked us to recreate the landscape of the new LEGO Batman Video game. This cake was comprised of three different cake flavors (vanilla, chocolate and red velvet) and was entirely edible. Even the sugar sculptures were made out of sugar. If this entry doesn't make much sense it's because there is a huge lack of sleep going on. We have been working on the cake for twelve days straight. 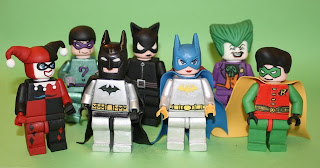 Dare I say this was the biggest cake I EVER made? Well, let's just say it was the HEAVIEST that I had to transport. This cake was close to 300 lbs. The six foot tall sock monkey we made for the Food Network's Extreme Cake Challenge was much taller and may have been up there in weight but it stayed in the studio. For this cake we had to enlist the help of SIX guys from the neighborhood to help us get it out of the bakery. That may sound like we just had to lift and go, but what I need to tell you is that you have to get through three doors, get over the foot of steel that extends toward the ceiling at the end of the stairs and then walk up four steep steps all before getting it into the van and driving in NYC traffic to our final destination! 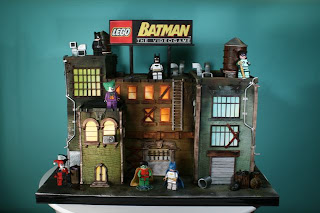 An exciting part of this project is that we took over ten hours of footage depicting the making of the cake and figurines, and my friend Lisa will create a video similar to our first YouTube video.
Here's a quick video of the cake cutting: http://www.flickr.com/photos/eggrollboy/2885022077/in/photostream/

This cake could not have been accomplished without the amazing work of Amanda, Liz and Jen (all pictured in the photo) and Edgard who came in to help too! 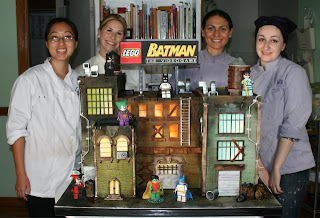 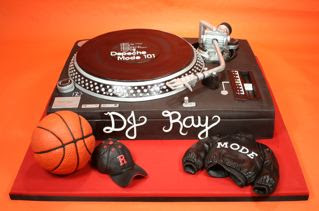 Despite making cakes for the last ten years I had never created a turntable. We are working on getting some newer cake photos up as we redesign our site but I could not resist giving you a sneak peak of one of our newest groom’s cakes. Our client, Rosalie was so great to work with. She wanted to make a turntable for her now hubby, Ray, with his favorite Depeche Mode album listing “their song.” Along with the cake we made some sugar decorations that brought us all back a decade. We recreated Ray’s DJ jacket (you know the kind that has satin fabric and old school embroidery!), a basketball since he played in college and a replica of his college baseball hat. 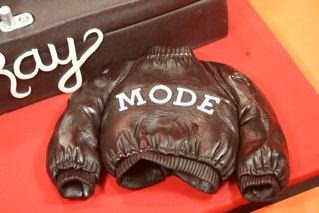 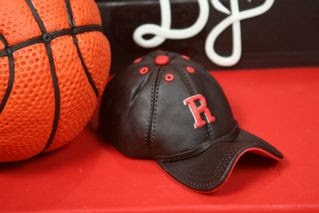 Rosalie said Ray was floored…well here you can see what she said for yourself: 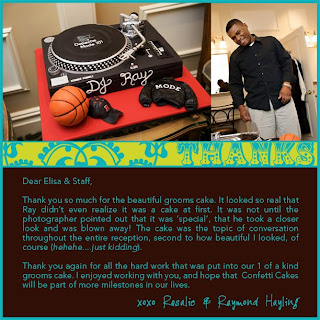 Logo made in sugar!
Big things are happening over here at Confetti Cakes. As I write this I am so excited I don’t know where to begin. First off I have to tell you the very first copy of our new book, Confetti Cakes for Kids has arrived! Even my parents haven’t seen it yet! It’s hard to believe something that we have worked on for SO long is finally here. It will be in stores by November 5th.

Next up, I’m going to be on the Rachael Ray Show…TOMORROW, Sept. 9th. Rachael is launching a very special new series called, “Rach to the Rescue.” Tuesday is just the first of the two segments I will be on. Stay tuned for the next big air-date but watch tomorrow so you know what is going on. I can’t reveal anything extra at this time but you know as soon as I can I will post some behind-the-scenes photos…all I can say is that this shoot was SO much fun.

We heard it was Rachael’s Birthday last week when we shot the first segment so Confetti Cakes made her a cute little popcorn cake to help Rachael celebrate her 40th birthday. The popcorn is one of our mini cake projects from our first book. 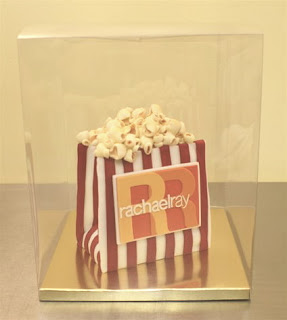 September has brought us a loaded schedule of private classes, PR for book #2, some HUGE cakes and we are getting ready to roll out our new website. Oh, and did I mention I’m moving too! As my mom would say, “life is never dull.”
Posted by Elisa at 7:13 AM 2 comments: