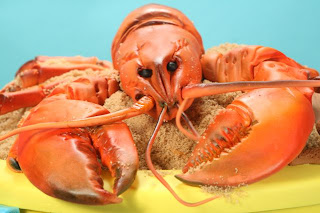 A few years ago I did a cake for a wonderful client who had a beach wedding but was celebrating their marriage in New York City with friends and family with a party. The concept for the cake, as well as the entire event, was created by the amazing team at David Stark Design. The cake we created for the party was a lobster coming out of a pail, with a shovel, and shells, sitting on top of a sandbox.

I think the cake came out great but it was before I was really using an airbrush. The lobster was good but definitely lacked some depth. I still do not use the airbrush very often, usually just to cover a large area of cake (think Lego Batman or six-foot tall sock monkey) but every once in awhile a cake calls for it. 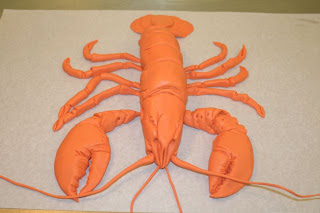 AFTER Four layers of Airbrush color 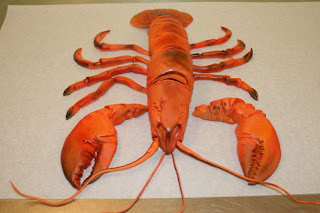 Last weekend we made a similar version of the Lobster cake for a 60th birthday party at a beach house. This time after I made all the pieces of the lobster in orange gumpaste, instead of just dusting it I went ahead and created the shell effect by using layers of airbrush spray. I first started with a coat of yellow, then orange, red and finished with a touch of green to give the darker areas some contrast. Make sure that if you use an airbrush you do not use regular food coloring gels, you need airbrush color. 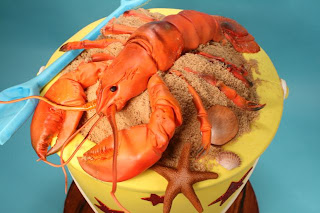 I also used some disco dust on this cake for the stars, which gives a nice glitter effect. We actually layered the cake with cupcakes around the base, with brown sugar "sand" and sugar shells, sand dollars and star fish but here is the final version before it left the bakery. 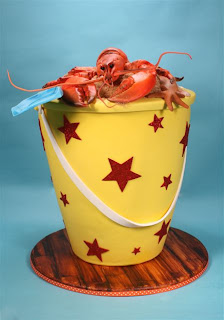