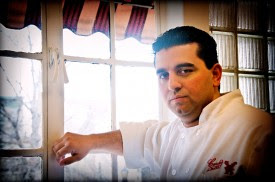 I love Buddy, His shows, and his family. I have his book and am loving it. Matter of fact I am baking out of it right now. I am making a Pittsburgh Steelers cake for my sons birthday. I say you are one lucky gal to be friends with such a genuine and talented guy.
God Bless!
hpgirl31

i´m a fan of his tv show,his cake are amazing..cograts, i´m from chile and i´m a cook to... visit my blog www.homecookingcf.blogspot.com

MBT shoes will naturally bring copy warming trend:MBT Raha big shoes (Skechers, Reebok, Mephisto) and small brand shoes (Avon, LA Gear) have a production line of a rocking chair, vice-like sole listing. But the real capital of a rocking chair-shaped flower is still the only MBT sole one, its own special features so far, can not be copied. Other brands produced rocking shoes (nickname domestic mbt shoes saledrama watermelon shoes) only copy to the appearance, on their implicit technical features, it is blank.

iculties of various European nations.He ran a rebrand-the-Euro contest, with a volume of an intellectual property legal textbook of which he is an editor as the prize.Most of the entries were submitted tongue Christian Louboutin UKin cheek. Among them are "the argh," "the folly," "the pigswill," and "the ohno." Others were "the markel," which appears to be a play on the German mark and the name of German Chancellor Ang

ion, and specifically ask whether Louboutin's lacquered red outsoles are a competitive necessity. Single color marks in fashion, where those marks meet all other trademark requirements, merit protection because the ability to register such marks would fit well within the Lanham Act and fortify the fashion industry's current shortage of intellectual property protections.Christian Louboutin Women's Mary Janes The court will probably fin

the bone structure of the face. It's like a beautiful face with no make-up. You can cover a not-so-beautiful face with make-up, but it is just a mask - it is the same with shoes."But that wasn't the only thing Louboutin told the crowd at the event, which was coordinated by Net-a-porter founder Natalie Massenet. "It makes the leg look longer," he said."[Toe cleavage] was something I discovered when

cided with the filming of the forthcoming Hollywood movie, The Iron Lady, which was being shot at Manchester Town Hall.Bride and groom Freya and Graham McAnally had been warned ahead of their big day that the cast Christian Louboutin Women's Pumpsand crew would be filming at the historic hall for two days as the interior resembles that of the Houses of Parliament. However the newlyweds were not prepared for the Hollywood cast, wh