Revenge of the Sock Monkey 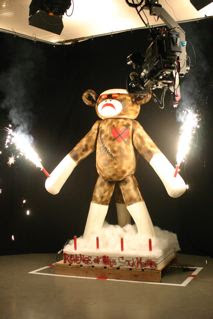 This is the anniversary week of our winning the Food Network's Extreme Cake Challenge. I will never forget that experience for so many reasons. It was an especially auspicious day since it was my Dad's birthday (April 24th) and he was out in Denver with us. Poor guy was running around getting us breakfast, snacks and dry ice (to put in Mr. Sock Monkey's head) so his ears would steam. And we didn't finish that night until 11pm so the birthday dinner I had planned fell by the wayside. 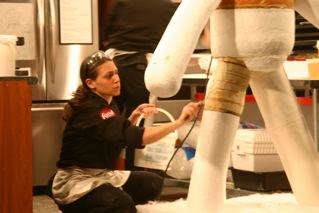 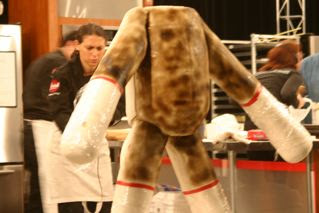 Unlike any of the other competitions I've done it was so special to be judged by people who actually make sculpted cakes just like I do. Duff, Geoff and Mary Alice from Charm City Cakes and the stars of Ace of Cakes could not have been better judges. Not just to me, but they were complimentary to all the other contestants and Duff really understood the EXTREME stress we were under since he has been a participant in so many competitions too. Even with playing competitive tennis in college I have really never felt so much stress in my life. The competitions are usually great because the weeks before I go I am so nervous I drop at least five pounds. 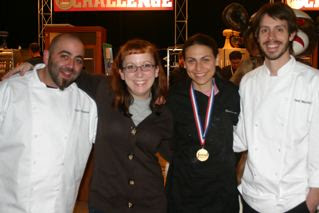 Overall the experience was so amazing and of course winning the competition against so many amazing cake designers was the real highlight! We couldn't have done it without so many people: our armature welder, Matthew James who is a working artist and came to the rescue in helping us build the Monkey's internal structure;my good friend and cake designer Buddy Valastro who got the sparklers to us before we left and of course my dad who was a constant supporter and gopher, and didn't leave the stadium the entire competition!
Posted by Elisa at 11:40 AM

Hi Elisa,
I remember watching this episode and was in looove with your cake (and the theme behind the inspiration). Skip to today when I notice a referral from your blog to mine, and you mention Blush on your blog. It's such a small world! Anyway, looooove your cakes, I'm in awe of your talent. And... I've added a link to your website on my blog - hope you approve!

Elisa,
I was soooo rooting for you on this cake! And the other of course...but anyways, thank you so much for the perspective on the side of the designer and decorator...Friends tell me all the time that I should be in those..and I just shake my head and tell them they are crazy..that takes some wicked determination and AMAZING skill! (thus the reason you won!)

Hi!
I saw your original Sock Monkey cake and cheered like crazy for you to win. I'm glad to see that the Revenge of the Sock Monkey had more luck. This cake is beyond awesome. Great job!

OH I loved this episode of Food Network's Extreme Cakes!!! You definitely deserved the win and I've been a fan of your work ever since I first saw you on T.V. doing a black labrador groom's cake. Thanks for being such an inspiration!

I just saw a re-run of this episode last night, and I have to say that I LOVED that giant sock monkey!!! I'm so glad you won the contest. You deserved it!!!

I posted the link about your cake here:

Alex, in the Madagascar cartoon? Or maybe there is a more believable reason.Either way, they are not the only feline-related shoes on offer at the moment.Alexa Chung, Katy Perry and SJP, again, have been spotted inChristian Louboutin Outlet Charlotte Olympia's ?ê485 Kitty flats which have nearly sold out.You'll need to be just as quick to get your hands - or feet - on Louboutin's lion's paws.This morning, we stopped by the

opped in the courtyard of the sports car, opened the" flower house".This damn night, he dumped his head. The foot throttle forcibly a bit, the car has been as an arrow shot.The body of the seventh chapterThe world-famous Las Vegas Casino, is the only one who can live in the darkness of the city, is also a night than the more popular city. When the Yu Wang also flashes in the street lamp, street la

. The trial court rejected the shoemaker'sChristian Louboutin Sandals request to bar St. Laurent shoes with red soles, and Louboutin filed an appeal of that ruling in mid-October.In that appellate filing, Louboutin noted that the "Keds blue rectangle on the heel, the Burberry plaid, the Gucci stripes all act as trademarks because the consuming public has recognized them as indicators of source."New York-based Tiffany, which

classic - and very stylish - stilettos seems to have branched out into taxidermy.One of his newest pair of heels, as seen on Blake Lively in New York this morning, are sparkly, hairy versions of a lion'sChristian Louboutin Pumps paws.Louboutin's heels are a celebrity favourite. Rosie Huntington-Whitely recently admitted that they made her 'feel like a woman'.'I feel they make you look very sexy, the cuts are beautiful; t